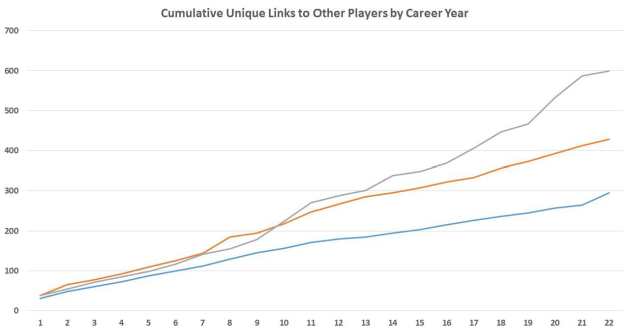 The 2017 NBA finals just finished last night, and someone asked Kyrie Irving about playing with LeBron James.  Now Mr. Irving probably knows more about LeBron James' basketball ability than anyone else in the world, as they've been teammates for the past three years.  When asked to make a comment about playing with Mr. James, here's what Mr. Irving had to say: "It would be a disservice to myself if I didn't try to learn as much as possible while I'm playing with this guy."  Obviously Mr. Irving knows that he needs to extract from LeBron James every last bit of basketball wizardry that LeBron has before their teammate relationship ends in one way or another.  Our research can show exactly the impact on Kyrie Irving's basketball performance that has been made via his on-court relationship with LeBron James.

The quote is from an online article at ESPN, titled "LeBron's legacy -- 3-5 Finals record and all -- is as intact as MJ's", and can be found here:

Now let's hear from perhaps the greatest NBA player of the 2017 playorrs: Kevin Durant.  As of this writing, the Golden State Warriors are up 2 games to 0 against the Cleveland Cavaliers in the NBA finals, so Lebron James may step up up his game e​nough to claim both the team and individual titles.  In any case, Mr. Durant said in an interview today (June 5, 2017) of his Warriors teammate Draymond Green: “When Draymond went out, I just tried to do my best to help everybody out,” Durant said. “He’s [Draymond Green] so good at just sniffing out plays before they happen. And so I just tried to follow his lead with that, and I learned so much from him throughout the season.”

This is a straight-on endorsement of the premise behind our analytical methodology: your performance will improve as you increase the number of interactions you have with others.  It also emphasizes that no matter how good you are at your particular organizational tasks, you can ALWAYS learn skills from someone else who is already there.

The original article is online at:

The latest sports star to promote the concept of learning from one’s teammates is San Francisco 49er’s current offensive tackle Trent Brown.  In an interview with Taylor Price, he talks about how he is learning from 5-time Pro-Bowler Joe Staley.  Price reports:

“Brown listens.  And he watches.  Whenever there’s time to review tape, Brown said he studies the way Staley displays his athleticism in the run game and how he uses his hands to his advantage.”

Obviously, Mr. Brown is trying to learn from Mr. Staley, and is applying the concepts underlying “Teammate Analysis.”

The original article is online at:

So here’s something a little different, this time from the latest edition of Popular Science.  In an article titled “The Science of Heroes”, the writer covers technologies that are helping U.S. Olympic athletes prepare for the 2016 Rio Olympics.  In the section about Nathan Adrian (three-time Olympic swimming gold medalist), the specific technology they describe is a set of LEDs that Mr. Adrian attaches to his body before swimming.  Special cameras then capture at very high speed the exact motions of his body while starting, swimming, and turning in the pool.  Software then analyzes that video to determine with incredible accuracy the places where Mr. Adrian’s body movements can be optimized.  They even talk about measuring and improving the angle of the bend in his toes!

This relates to Teammate Analysis because of the application of the knowledge gained from Mr. Adrian’s videos and optimized motion through the water.  Of course, those training athletes for the Olympics are smart, so they realize the value of optimizing Mr. Adrian’s movements will help him, but if they can then use what Mr. Adrian has learned and apply it to other swimmers, Mr. Adrian’s improvement is multiplied many times over.  The author writes:

“Now, when Adrian executes a perfect dolphin kick at practice, trainers can turn the data into a baseline to tell other swimmers how to replicate it.  ‘We know who’s good at the technique,’ Mark says. ‘It’s about figuring out how we can get more out of our athletes to be like that.’”

This is exactly the essence of Teammate Analysis!!!

You can find the original article online at:

Very interesting article today from ESPN about building a sustainably-winning basketball team in the NBA.  They also point out the difference between what teams want (more team wins and championships) versus what fantasy sports fans want (greater success for the individuals that comprise their teams).  However, the article completely misses the value of the experience gained by players from their teammates that they then carry with them into their future performances.  Too bad they didn’t analyze the connections made by players like Steph Curry and Kevin Durant now that they will be teammates on the Golden State Warriors.

Anyway, the ESPN article is titled “The Delicate Balance of NBA Team Building” and you can find it here:

Yet more evidence that teammate connections are incredibly important and that the professional athletes themselves are saying so.  This article appeared in the San Francisco Chronicle (sorry most of these news items are from the SF Bay Area – that’s where I’m located and mostly what I see is local news) and is titled “Giants on facing Barry Bonds in Miami uniform: ‘It’ll be weird’.”  In the article Brandon Crawford of the San Francisco Giants comments on talking with Barry Bonds when Bonds (ex-Giant, of course) was a 2014 spring training guest coach for the Giants.  Crawford says:

“I wouldn’t say it was any different than any other batting coach,” said Crawford, noting Bonds told him to keep his front shoulder closed against lefties, advice he has received from other coaches. “But I would say hearing it from him, one of the best hitters ever, made me think about it a little bit more.”

If you don’t think that players can help each other learn skills that will improve their future performance, check out what happened to Mr. Crawford’s home run production in 2015 after he spoke with Mr. Bonds and had time to internalize what he heard: He more than DOUBLED his home run efficiency per at-bat in 2015!!!

I’m telling you – we are on to something here at Teammate Analysis!  This example comes from Ron Washington, 10-year MLB player and subsequent coach and twice World Series manager (both time with the Texas Rangers).  While Mr. Washington was hired as a coach, he is acting very much like a teammate to Marcus Semien in the article “Oakland A's have a new man at shortstop.”  In particular, he says about an interview of his work with Mr. Semien:

“I took a back seat and let Marcus talk," Washington said.  "And when he was talking, I thought it was coming out of my mouth.  He was talking about stuff I told him in May.  They were trying to get me to talk, and I said, `No, let Marcus talk.'  And I'll be damned if he didn't.  That just made me so proud.”

Obviously the A’s know something about sports analytics, but their hiring of Mr. Washington particularly to work with Marcus Semien suggests that they believe in the value of Teammate Analysis even if they don’t explicitly endorse it.  Imagine how far ahead of the other MLB teams they would be if they tracked, managed, and controlled which of their players connected to other current players (and past players like Mr. Washington)!

The latest evidence, this time from MLB, that connections to teammates make them better players.  The headline of this article says it all: "Bassitt unveils new look on mound after tip from Gray."  The article describes how Oakland A's pitcher Chris Bassitt was tipping his pitches to batters and so turned to fellow pitcher Sonny Gray.  Quotes from the article:

Mr. Bassitt is obviously a benefactor of Teammate Analysis even if he doesn't know it.  Now if the Oakland A's were proactive in understanding and apply the math that we have developed about player connections to each other, they could take much greater advantage of this type of player performance improvement!

"It's also about the Warriors' front office understanding exactly what it has, and the inherent value of every piece."

"It makes sense because this group of players is supremely talented, supremely connected, and why would you break that up?"

Mr. Kawakami appears to understand (and intuits that the Warrior's front office understands as well) that the connection between teammates (note his use of the term "supremely connected") is of vital importance to winning in professional sports.  I'm quite sure that the Warriors did NOT apply Teammate Analysis to get to the point they have, but imagine how long into the future they will be this great if they begin to understand and apply our principles.

" . . . every major move the Pelicans have made has been to surround Davis with good fits: acquiring Ryan Anderson and paying Eric Gordon to space the floor for Davis inside, moving big men Robin Lopez and Nerlens Noel for Tyreke Evans and Jrue Holiday to give Davis pick-and-roll partners in their primes."

Yet another example of a professional athlete whose management is trying to apply Teammate Analysis principles by putting together the right teammates in order to try to get the best performance from both the individual and the team.  Wonder if they applied Social Network Analysis to see if they're choosing the optimal teammates?