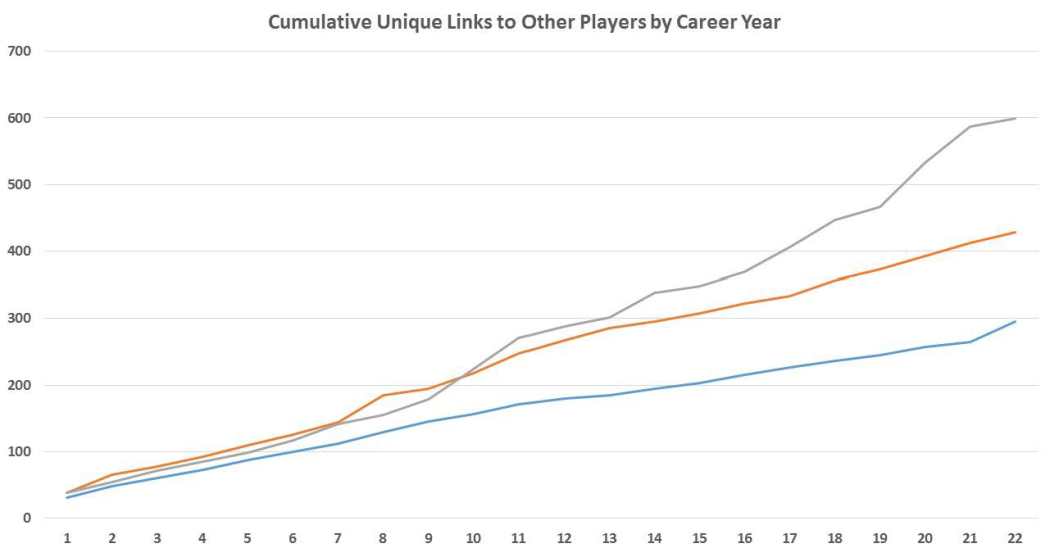 You are not alone!  According to a New York Times article (July 13, 2015)*, almost 57 million individuals participate in fantasy sports leagues in North America.  Until now, those participants had to work with the same statistics that have been used for years, essentially linear and symmetric averages of past performance.  Our datasets will allow you to move forward into the next generation of sports analytics.  We call this analytical process "teammate analysis."

When we use the term "linear" we mean that every time period, from one second to one year, is counted as providing the same added experience or value to the individual player.  For example, when a coach is asked about the experience level of a particular player, they will invariable say something like "He has 9 years of experience" or "He's played in over 500 games."  The problem with describing experience using time-based measures is that every time period is considered to add the same value to the player's experience as every other time period.  However, we all know that one learns far more in our first time period performing a task than one does in the last time period performing that same task, and that, in general, we learn less about how to perform a task in each additional time period as we perform that task over time.  This is not news at all, but we are the first to propose, develop, and publish professional sports data that allows you to prove it.

Next, when we use the term "symmetric", we mean that every time period, from one second to one year, is counted as providing the same value to every individual performing the task.  For example, at the end of every professional sports season every individual playing that sport is considered to have one more season of experience.   However, a rookie, playing the same number of games in some season as a veteran who has played 10 years, will gain far more experience in that season than the veteran (obviously because the rookie has so much more to learn than the veteran).  Yet, during that same season, both the rookie and the experienced vet will be consisdered to have gained the same amount of experience.  Again, we are the first to propose a measure of experience (and therefore increased player value) that is not strictly time-based.

The value to you of our datafiles is that they are the ONLY place where you will be able to add connection-related results to your fantasy league player selection decision-making process.  Don’t you want to know which players have drastically increased the number of unique other players they played with or against this past year?  We have that data!

You can also use our datafiles to determine the answer to many other questions related to player experience, such as this one:

(Our data scientists found the answer in about 30 minutes, using our MLB Dataset #1.)

We arbitrarily chose 100 as the level at which a player has played with enough other players to significantly increase their performance because they have been able to learn enough from those other players.  You can choose whatever level of connections you think is best.  This example was chosen simply as a way to show the types of questions that can be answered by our datasets alone; we have not yet calculated the specific number of other players played with that is necessary to significantly improve a player’s performance.  But you get the idea . . .

Anyway, the resulting list that is the answer to the above question (in alphabetical order by player last name) is:

And this example is just ONE of the huge number of ways that you can use our player connectivity datasets to more deeply investigate MLB players and teammates.

So, don't be the last person in your fantasy league to learn about measuring player experience using Social Network Analysis (SNA).  This well-founded calculation process is based on a branch of mathematics called "graph theory."  You may have heard about one application of SNA when someone talks about "degrees of separation."  When they do, they're talking about one way to measure "how connected" someone is in a larger group of individuals.

Our analytical methodology uses SNA to determine the connections made between every MLB player and their teammates since 1914.  If you haven't read the rest of our website, we base our analysis process on the premise that when humans come together to complete a standardized task, they learn from each other and thereafter improve their own task performance because of those interactions.  A MLB player who has played with a larger total number of other players (or even better, one who has played with a larger total number of different other players) increases the probability that they have played with someone who can teach them something they need to know.  Given this, don't you want to know who's on the list of top 10 current MLB players who have played with the most other players?  Perhaps even more importantly, players will learn from those they play against!  Which players are on the top 10 list of current MLB players having played against the most other players?

But don't take our word for it.  In a Washington Post article of June 16, 2015, columnist Thomas Boswell wrote:

“What can we study next? Where can we find a ‘market inefficiency’

and thus a tiny edge?”

and we firmly believe the answer to both of those two questions for all professional sports around the world is: Teammate Analysis.